Friday, the last day of school. I'm all set to go at my aunt's house in Las Pinas and spend my weekend with my cousins. We'd play all day. Pretend to be superheroes or WWF superstars. Take turns in the Atari console. Play " sipa ball" with neighborhood kids. And lock ourselves inside my cousins room, turn on the a/c,

pick the best toys and make an army and find a suitable furniture (a cabinet, a side table with wheels, the top bunk of a double decker bed, a study table or even a rocking chair) which will serve as an HQ (syempre, kailangan may tirahan ang armies namin). Amongst the toys were G.I. Joe's, Marvel action figures, ThunderCats, Voltron, Daimos, Lego, Tonka, Bravestar, He-Man, Matchbox's and ofcourse, Transformers. We'd pit our armies and try to out do one another by giving the toys special abilities such as laser beams, forcefields and super strength.

Those were the days.

When there was only one flavor of Pringles available in the market. Apples are worth 35 pesos each. Traveling time from Alabang to Makati was only 15 minutes.

Michael Jackson's Thriller was the craze. The Ford Laser was the coolest car. A Big Mac meal in Mc Donalds is only twenty five Pesos and they still serve milkshakes. Big Bang sa Alabang was the biggest attraction every Christmas. And a single G.I. Joe figure would only cost 45 Pesos in Rustans.

I'd only get these on special occasions such as birthdays or during the holidays.I only had a couple of G.I Joe's and Matchbox, whereas my cousins had dozens. That's why i love going to their place every weekend, so that i could play with their toys. What i really love is the Transformers. Unfortunately, it was expensive and i was just able to afford one which was Laserbeak of the Decepticons.

Fast forward to 2007. Transformers the Movie is now out in cinema's. 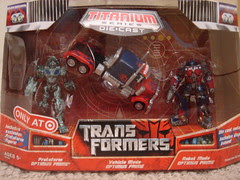 Although I haven't seen it yet (wife and i promised to see movies together) it brought so much memories when i was a kid. I wasn't really that excited with the movie, but with the toys. I really went gaga when the first wave was released on the local malls. I started with one, then with two, then with........I even asked honey to buy exclusive releases in the US.

Fortunately, I'm not the only one with the Transformers Fever, i know a couple of people who's on the same predicament as i am. And FYI, these are guy's that are on their 30's.."How i wish that these toys only cost 45 pesos. And again, those were the days".
Posted by Brian & Anna at Tuesday, July 17, 2007

Email ThisBlogThis!Share to TwitterShare to FacebookShare to Pinterest
Labels: collectronicles-brianicles